Take a look at a complete landscaping project we recently completed in Aldinga.

32Lm of high quality tubular aluminium fencing border Sir Walter Buffalo turf out the front of this home. The fencing being powder coated in black with the spear topped design really makes for a striking statement.

It’s what can’t be seen in photos however that is the most impressive feature of all in this garden. Kisss subsurface irrigation has been installed underground and is run automatically off the irrigation controller.

KISSS is a new generation sub-surface textile irrigation system that provides greater control over root- zone conditions. KISSS is the only irrigation system designed specifically for use underground. The patented design ensures water is delivered uniformly to the soil at a rate that is consistent with the capillary absorption rate of the soil.

The Sir Walter Buffalo turf also looks brilliant at the rear of the home and has been bordered nicely with a block wall. The wall has been constructed on a concrete footing and was used to create a raised garden bed. All sides of the wall to full height and base was waterproofed and drainage was connected into the client’s storm water system. The face of the wall and the capping was texture coated to match the client’s new home.

The client also had a lot of concreting work done around the home. We used 32mpa grey standard concrete which was then acid washed and sealed. As you can see in the photo it makes a stunning statement! The garden feature was highlighted with internationally sourced white pebbles and stainless steel garden uplights were scattered throughout both the rear and front of the home to ensure the garden’s shine in the evenings. 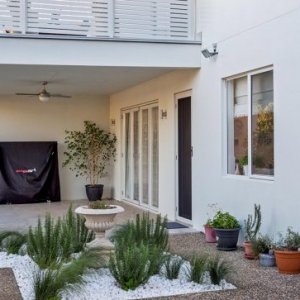 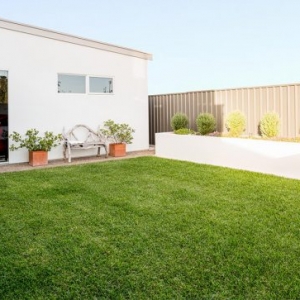 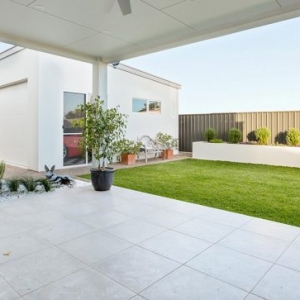 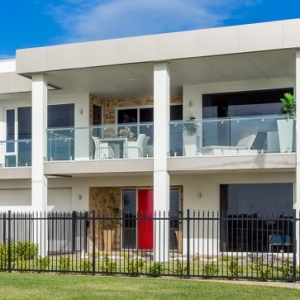 We are proud to be members of the Master Landscapers of SA Association.